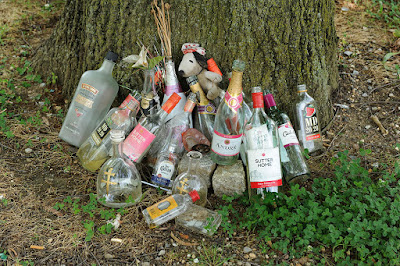 As there have been several memorials to homicide victims built in this small park at the intersections of H Street, Florida Avenue, Benning and Bladensburg Roads NE, I am not completely certain who this one was erected for. The most recent slaying in the area was of Kareem Elliot Watkins, who was killed in this block of Maryland Avenue NE on May 11th, 2021.

There was also a newborn child, Kyon Jones, who was killed close by on May 7th.

May they, and the community, have rest and be free from all troubles.

From a DC Police report:  Detectives from the Metropolitan Police Department’s Homicide Branch are investigating a homicide that occurred on Tuesday, May 11, 2021, in the 1500 block of Maryland Avenue NE, Washington DC. At approximately 3:51 am, members of the Fifth District responded to the listed location for the report of an unconscious person. Upon arrival, members located an adult male victim suffering from an apparent stab wound. DC Fire and Emergency Medical Services responded to the scene and found no signs consistent with life. The decedent remained on the scene until being transported to the Office of the Chief Medical Examiner. The decedent has been identified as 43 year-old Kareem Elliot Watkins, of Temple Hills, MD.

From a DC Police report on the slaying of the infant Kyon Jones: Detectives from the Metropolitan Police Department’s Homicide Branch announce an arrest has been made in reference to a missing person / homicide investigation that occurred on Friday, May 7, 2021, in the 1500 block of Benning Road NE, Washington DC. At approximately 1:10 pm, members of the Fifth District responded to the listed location for the report of a check on the welfare of an infant child. Upon arrival, officers located the mother, who was unaware of the infant’s whereabouts. The Metropolitan Police Department’s Youth and Family Services Division responded to the scene and initiated an investigation into the circumstances surrounding the missing person’s disappearance. The missing person was identified as 2-month-old Kyon Jones, of Northeast DC.

Based upon the suspicious nature of the missing person’s disappearance, the Homicide Branch assumed investigative responsibility of the case. The missing person’s remains have not been located at this time, however, based upon the information gathered during the investigation a suspect was identified and charged accordingly. Additionally, it was determined that this offense is domestic in nature. On Friday, May 14, 2021, 37 year-old Ladonia Boggs, of Northeast, DC, was arrested and charged with Felony Murder.