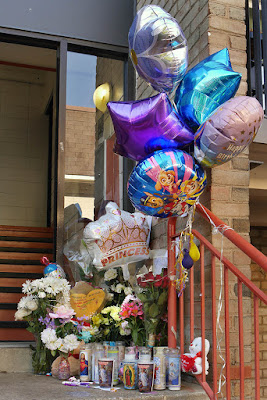 From a Herndon (Virginia) Police report:  Homicide 6/19/2021 500-blk Florida Ave, Herndon VA. Around 7:30 AM on Saturday, June 19, 2021, HPD received a call from Fairfax County Police Department regarding an incident that just occurred in Reston. A subject had died by suicide and prior to his death, he made statements regarding the welfare of three individuals: one adult and two juveniles. Based on the information received at the scene and from residents in Herndon, our officers responded to a home in the 500-block of Florida Avenue for a welfare check. Upon arriving on the scene, our officers located the bodies of the deceased victims in the home. We can confirm that the three were victims of a homicide. The case remains under investigation.

Excerpts from a report in The Washington Post: Family members on Sunday mourned the deaths of a woman and her two children, slain a day earlier in what Herndon police called a “horrific” triple homicide the day before Father’s Day. The woman was Claudia Menjivar, 34, and her two children, Dayana Gutierrez, 12, and Carlos Josué Gutierrez, 10, according to Erlinda Gutierrez, whose brother used to be in a relationship with Menjivar and is the father of the two children. The three died in their home in Herndon, police said. “She was a good mom to my nephews. She was a hard-working girl,” Erlinda Gutierrez said. “She didn’t have any problems with anyone.”

Few new details emerged Sunday about the killings, but police said the deaths appear to be linked to a suicide that took place early Saturday at a parking garage in nearby Reston. Fairfax County police responded just before 6 a.m. to a 911 call about “an emotionally disturbed person” at the parking garage, according to Fairfax police spokesman Anthony Guglielmi. Officers arrived to find a man threatening to jump from the roof of the garage, which is at Reston Town Center.

Guglielmi said the man told police that people had been harmed inside a home in Herndon. Guglielmi said he does not know whether the man said he caused the harm. The man jumped from the roof about 6:30 a.m., despite officers’ efforts to prevent it, and was pronounced dead at the scene. Fairfax police then contacted Herndon police and asked them to check on the house the man had mentioned in Herndon. With assistance from neighbors, Herndon police entered the house in the 500 block of Florida Avenue. They found a “very horrific” scene, Herndon Police Chief Maggie A. DeBoard said. The three victims were found dead inside the home. DeBoard said investigators determined the man had “a personal relationship” with the adult victim.

Erlinda Gutierrez said police contacted her brother to inform him that his former partner was the woman who died Saturday, along with their children. She said Menjivar is from El Salvador and worked as a housekeeper. The children were enrolled at Herndon Elementary School. Menjivar loved music, ranging from Mexican singer Chalino Sánchez’s 1990s song “Los Chismes” to contemporary Spanish-language music. Her biography on Facebook contains a lyric from La Makina’s “Nadie Se Muere”: “Nadie se muere por un amor que no le conviene,” which translates to, “Nobody dies for a love that does not suit them.”

Erlinda Gutierrez said she and her family are struggling to process the deaths. “I don’t know why someone would do that to two innocent kids.” Saturday, she said, was Dayana Gutierrez’s 12th birthday."

I was very moved and saddened to document this large memorial site in a quiet garden apartment complex. There were many children playing nearby while I was there, and there were visitors paying the respects.

A terrible tragedy. May they all rest in peace, and their families and community heal and be comforted.

There is more information on the Herndon Patch site and on People magazine's site. 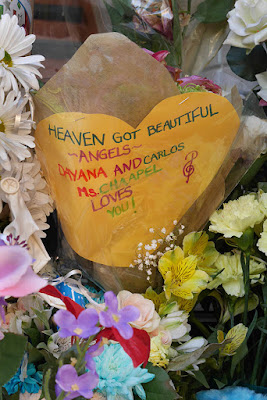 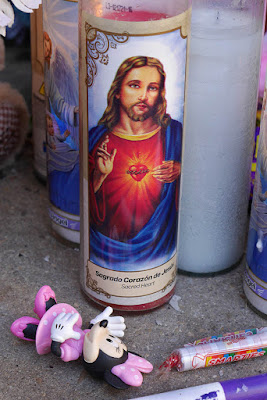 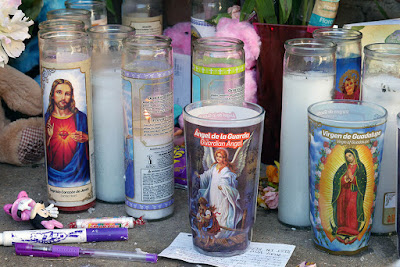 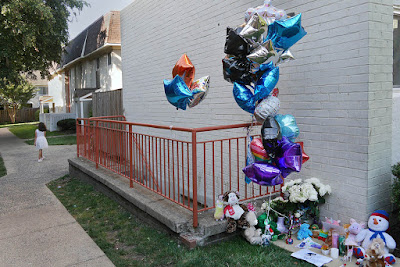 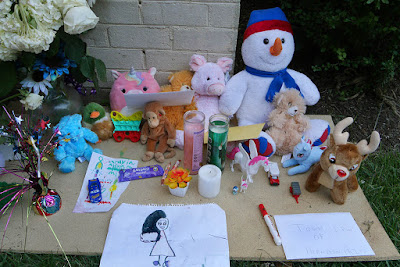 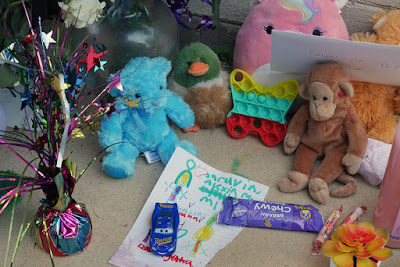