From NBC TV: Brishell Jones was just 16 when she was shot and killed in the South Capitol Street massacre in 2010. On Friday, 1/19/18 the street she lived on was renamed in her honor, with civic officials and family attending. A bill enacted by the Washington DC City Council names the block in Ward 8 as "Brishell Jones Way." 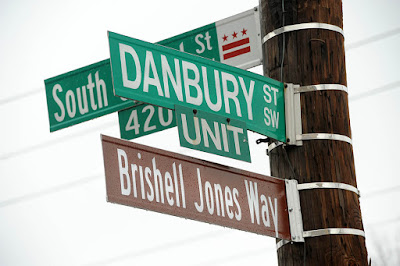 Ms. Jones was slain in a notorious mass killing at the corner of Brandywine and South Capitol Streets SW on March 30, 2010, along with Tavon Nelson, DeVaughan Boyd, William Jones III, and Jordan Howe. Several men were convicted of the murders. Ms. Jones' mother has been especially outspoken in her activism against gun violence and in honoring the legacy of her daughter's life.

More about the situation and the original memorial built to honor these slain young people, taken before their time, can be viewed on this shrines blog here.