This memorial along busy Minnesota Avenue is for Steven Slaughter, a 14 year old boy who was killed there recently.

From a DC Police report: Detectives from the Metropolitan Police Department’s Homicide Branch are investigating a fatal shooting that occurred in the 1700 block of Minnesota Avenue, SE, Washington DC on Sunday, January 14, 2018. At approximately 6:59 pm, members of the Sixth District responded to the listed location for the report of a shooting. Upon arrival, officers discovered a juvenile male, suffering from gunshot wounds. DC Fire and Emergency Medical Services responded to the scene and transported the victim to an area hospital for treatment. After all lifesaving efforts failed, the victim, identified as Steven Slaughter, 14, of Southeast DC, was pronounced dead. 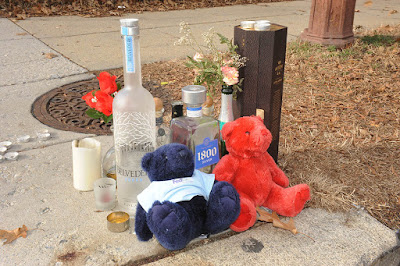 From WJLA TV: Police say they were called to 1720 block of Minnesota Avenue, SE near the Garden Memorial Presbyterian Church. Officers say they found Steven Slaughter of Southeast D.C. there with a multiple bullet wounds. Slaughter was taken to the hospital but was later pronounced dead, officials say.

This site is just a couple of blocks from two other recent slayings in the neighborhood.