This memorial adjacent to a mural depicting Dr. Martin Luther King Jr's Washington "I Have A Dream" speech is to Maleak Coffin, slain at this site recently. 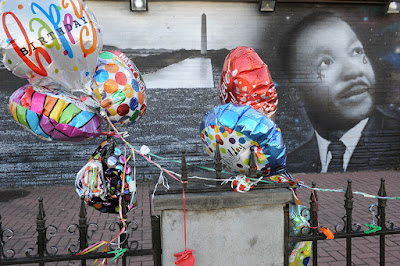 From a DC Police report: Detectives from the Metropolitan Police Department’s Homicide Branch announced that a second arrest has been made in reference to a fatal shooting that occurred in the 2900 block of Martin Luther King Jr. Avenue SE, Washington DC, on Saturday, December 23, 2017.
At approximately 11:08 am, members of the Seventh District responded to the listed location for the report of a shooting. Upon arrival on the scene, members located an unconscious male, inside of a vehicle, suffering from a gunshot wound. DC Fire and Emergency Medical Services transported the victim to a local hospital for treatment of life threatening injuries. On Tuesday, December 26, 2017, the victim, identified as Maleak Coffin, 22, of Southeast DC, succumbed to his injuries and was pronounced dead.

This area, near the intersection of Martin Luther King Jr. Avenue and Malcolm X Avenue is sometimes called "The Corner." May it be untroubled, and peace return.
Posted by Lloyd at 7:41 PM