From a Prince Georges County police report: On November 19, 2013, at about 2:45 am, patrol officers were called to the 2400 block of Kent Village Place, Landover Maryland, for a possible stabbing. When they arrived, patrol officers found an adult female outside suffering from trauma to her body. She was pronounced dead on the scene. The victim is identified as Stefanie Anne Littlejohn, 30, of Suitland, Maryland. 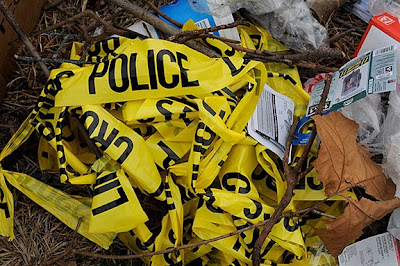 I found this mass of police crime scene tape bundled up near the site of Ms. Littlejohn's passing.

Sad. Peace to all concerned.