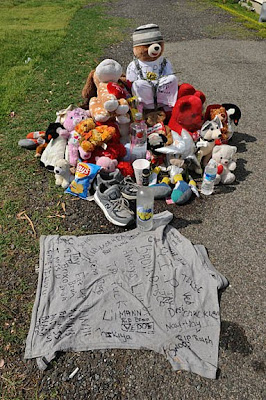 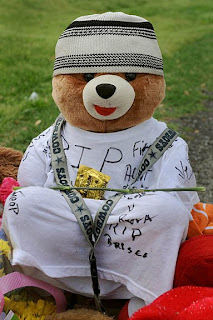 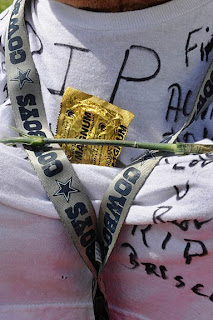 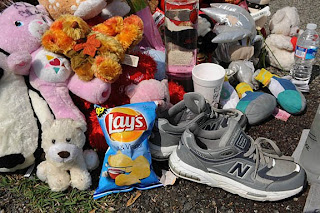 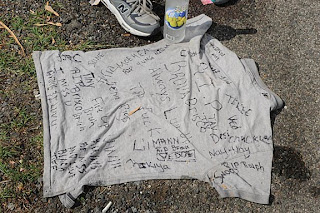 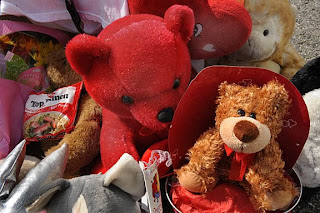 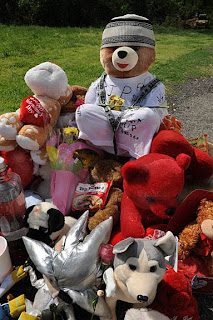 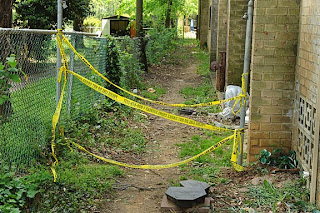 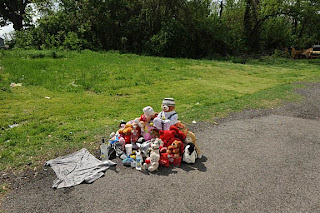 This shrine is for Raphael Briscoe, 18, who was shot by a Washington DC police officer. It is in the 2400 block of Elvans Road SE, Washington DC. It was built immediately after his death by friends and family.

There was a large police presence in the neighborhood, and quite a number of sad and agitated people were gathered near the shrine. Many were questioning the situation.

From a DC Police report:
At approximately 2:30 pm April 26, 2011, members of the Gun Recovery Unit on patrol in the 2400 block of Elvans Road SE, encountered a male armed with a gun.
Shots were fired and the suspect was transported to a local hospital where he was later pronounced dead. A weapon was recovered.
The Metropolitan Police Department’s Force Investigations Team is investigating. The officer has been placed on administrative leave.

Adapted from the Washington Post:
Rafael Briscoe, 18, died after being shot by police in the 2400 block of Elvans Rd SE.

Officers from a gun recovery unit were working in the area Tuesday, police said. While on a patrol, officers encountered a male with a gun. The statement gave few details of how matters unfolded.

“Unfortunately, BB guns are designed to look like semi-automatics,” Lanier said, adding that an officer can’t tell the difference when making a “split-second” decision.

She said she did not know yet whether the suspect fired the BB gun.

May justice be found, and peace to all involved in this unhappy situation.
Posted by Lloyd at 3:10 PM

Rest In Peace Bae Me and Au'brey Love You and Miss you dearly. nomatter what they say iknow its all lies. and KARMA is soon to come. your girlfreind>>> Muah

GONE BUT NOT FORGETTIN. SLEEP BABY LOVE YOUR GIRLFRIEND.

His name is spelled Ralphael. I can't wait for his name to be cleared. He was shot in the Back, he was not a threat to any officer therefore, excessive force should not have been used. There was no gun or bb gun at all. Lanier covered for her corrupt officers. Truth will soon come to light. I miss and love you Ralphie!

Hey was good cuz. Just sitting here thinking about you man... Everyone misses you.. I still remember the day I got that call.. I just couldnt believe it... Keep watching over us cuzz. Ill see u when I get there... love ya brah.