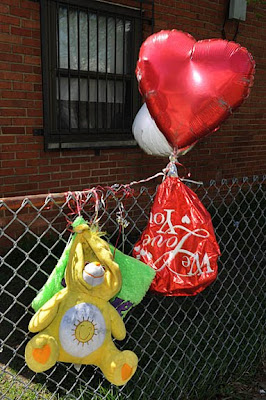 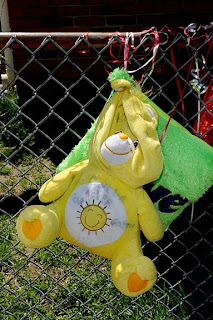 So far as I can acertain, this shrine is to Joshua Ruffin, whose funeral was on the same day as these photographs were taken. I spoke with a distraught and tearful woman at the site who also lost her son to violence. She was too upset to attend the funeral. She said the shrine is exactly where Mr. Ruffin's body lay after he was shot.
From DC Police reports: On Wednesday, April 6, 2011, at approximately 11:20 pm, members of the Seventh District responded to the report of a shooting in the 700 block of Yuma Street SE, Washington DC. Upon arrival on the scene, they found a male victim suffering from an apparent gunshot wound. They also located another victim in the same area suffering from multiple gunshot wounds to the body. DC Fire and EMS transported the second victim to a local hospital where he was subsequently pronounced dead. He has been identified as Joshua Ruffin, 20, from SE Washington. The first victim showed no signs of life and was pronounced dead on the scene. He has been identified as Reginald L. Williams Jr. 22, of NE Washington.

For more details, see HomicideWatch.
Posted by Lloyd at 10:24 PM