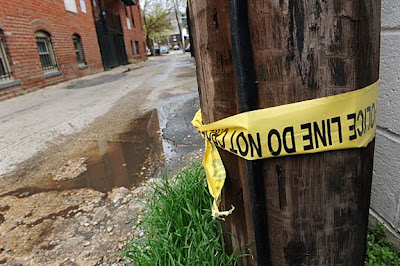 From DC police reports: On Sunday, March 27, 2011, at approximately 2:25 am, members of the Third District responded to the 1200 block of 11th Street, NW Washington DC, for the report of a shooting. Upon arrival on scene, they found a male victim suffering from a gunshot wound. DC Fire and EMS transported the victim to a local hospital, where he succumbed to his injuries and was pronounced dead at approximately 5 am. The victim has been identified as Jose Hernandez-Romero, 24, of the 1400 block of N Street, NW.
When officers arrived on the scene, they found the suspect being restrained by witnesses to the shooting. The suspect , identified as Alexis Pineda 24, was arrested and charged with Murder Two While Armed. A firearm was recovered at the scene.

According to other reports, the killing occurred at the now-closed "El Sauce" bar and restaurant. This police crime tape was in the alley behind the main street.


More on Mr. Hernandez-Romero's death is at HomicideWatch.
Posted by Lloyd at 9:30 PM

Thank you so much for always showing these memorials. They always show the sadness & the pain of the families who are left behind. May God bless this family.