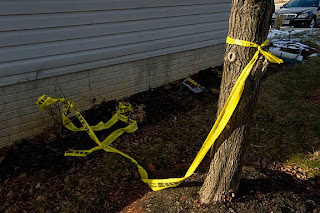 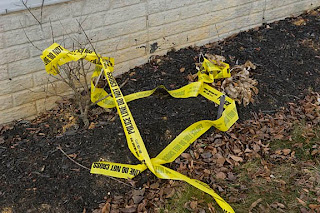 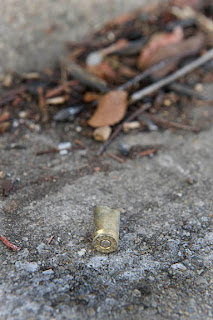 From press reports: A man was shot and killed late Saturday January 8, 2011, in Prince Georges County's second homicide of the day. That killing was the ninth reported in the county since the New Year began. Police identified the victim of the late Saturday killing as Corteza Warren Livingston, 21, of the 3100 block of Dynasty Drive in the Forestville area. Livingston was found with a gunshot wound on the block where he lived. It was not clear Sunday whether the shooting occurred in his home. Police said a 24-year-old man, who also was apparently shot in the same incident, was taken to a hospital with injuries that were not thought to be life-threatening. Police said they think the incident stemmed from a personal dispute. Officers said they were searching for suspects and trying to determine a motive.

I was a bit surprised to find a spent bullet shell casing just a few feet from the crime scene tape. I promptly reported it to PG police's homicide unit, who were appreciative, and said they would soon send a detail to retrieve this possible evidence. It has been a very difficult- and sadly busy- two weeks for them in trying to maintain peace and obtain justice in the community.
Posted by Lloyd at 9:19 PM