Billy Mitchell- shrine in the snow 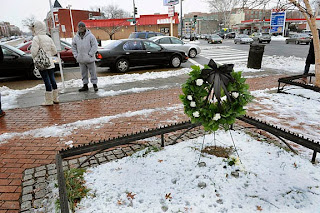 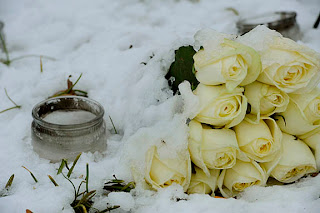 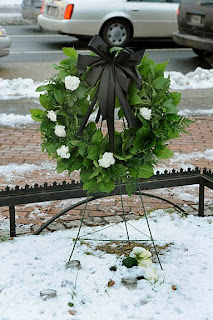 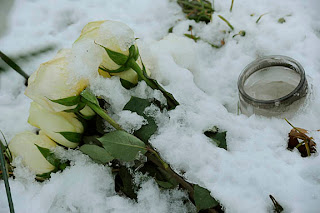 From DC police reports: On Wednesday, January 19, 2011, at approximately 11:00 pm, units from the Fifth District responded to the intersection of North Capitol Street and Florida Avenue NW, Washington, DC, for the report of the sounds of gunshots. Prior to their arrival a First District Unit was flagged down by a citizen and advised of a shooting victim on this corner. DC Fire and EMS responded to the scene and transported the victim to an area hospital where he succumbed to his injuries and was pronounced dead.
The decedent is identified as William Mitchel, 33, of Northwest DC.

The Washington Post reports that he may have been killed while assisting someone else in trouble, and refers to him as a "Good Samaritan."

This memorial is nearly in sight with the US Capitol Dome, less than a mile away.

Extensive reporting on Mr. Mitchell's situation on the always excellent and meaningful site, Homicide Watch:
http://homicidewatch.org
Posted by Lloyd at 8:30 AM

Thank you for the pictures of the wreath and flowers for Billy Mitchell. Billy was my cousin, we were born a only a month apart so he was more like a brother to me. I miss him alot. His death still hasn't totally sunk in. But thank you for the pictures, I live 3,000 miles away but at least I know that they are there and they remind people of his selflessness.