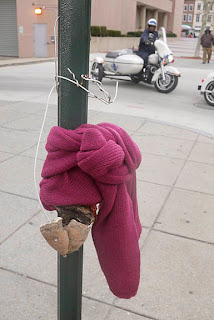 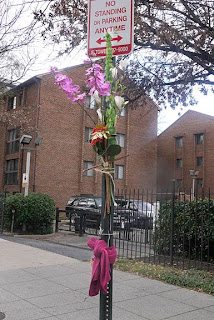 I am not certain who this small shrine commemorates in the 1400 block of U Street NW, Washington DC, but I believe it is for Jamal Coates. There was quite a bit of press about this situation at the time.

In any case; Memory and peace to all.

From police reports: On Tuesday, September 28, 2010, shortly after 12:00 pm, a shooting occurred in the 1900 block of 13th Street NW Washington DC. The investigation revealed that the vehicle that was fired upon fled the scene of the shooting and entered the 1100 block of U Street, NW, where it was involved in a collision with two other vehicles and overturned. Two occupants of the overturned vehicle were struck by gunfire. DC Fire and EMS personnel responded to the scene. The surviving victim was transported to an area hospital. The second victim, Jamal Coates, 21, of the 1400 block of Spring Road, NW, did not show any signs consistent with life and was pronounced dead on the scene by the Office of The Chief Medical Examiner.
Posted by Lloyd at 12:36 PM