Scott Staten / Spongebob and candles in the alley 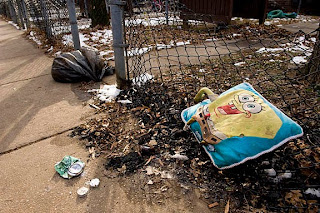 From DC police reports: On December 8, 2010, at approximately 8:30 am units from the First District responded to the 1300 block of Half Street SW, Washington DC, to investigate the call for a man down. Upon arrival they discovered a male victim, Scott Staten, 17, of Southeast, suffering from gunshot wounds. DC Fire and EMS responded and did not find any signs of life. The victim was subsequently pronounced dead on the scene/

I have documented several shrines in nearby alleys over the years. It is just a couple of blocks from the new Nationals baseball stadium. The young man I mentored, Dion Johnson, lived for some time in this neighborhood in the 1990's.

To young Mr. Staten's family; a prayer for peace.
Posted by Lloyd at 11:34 AM