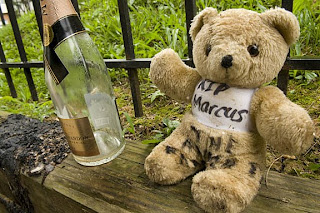 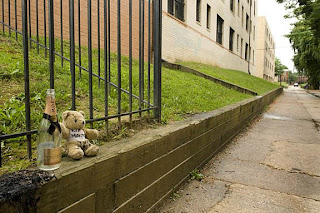 This very small shrine to Demarcus Brown is in the alley behind the 200 block of Newcomb St SE, Washington, DC.

From the DC Police report:
"On Sunday, June 14, 2009, at approximately 2:14 am, officers assigned to the 7th District responded to the 200 block of Newcomb St. SE to investigate the sound of gunfire. Upon arrival, they located an adult male suffering from multiple gunshot wounds lying in the rear of the 200 block of Newcomb St. DC Fire & EMS personnel responded to the scene, but could find no life signs. The body of the victim, identified as 25-year-old Demarcus Brown of SE Washington, DC, was later transported to the Office of the Chief Medical Examiner for the District of Columbia."

There were quite a number of police cruisers in the neighborhood the day I photographed this sad and quiet site.
Posted by Lloyd at 12:33 PM

i love my cousin so much and i miss. he will be in my memories.

Marcus,
U left this earth and left me waaayyy to soon. I cannot believe u r gone. I miss u so much. the backyard, and essence shows aint the same without u, eventhough circumstances allowed us not to b together, i never stopped loving u, u will always have a place n my heart and alwayz b my baby. all i have now is the cherished memories we shared together (smile) and thats good enuff for me. I love u so much and r.i.p.

another sad loss, at least this time the grave will have a name, the last time that I read a post for a case like this the person couldn't be identified.

Demarcus this is your mother.I love and miss you so much.Its going on two years and it seems like yesterday. I'm sitting here on this computer crying thinking about you.Every waken minute of my day I'm thinking about you.I really don't know how I'm making it.I truly believe you are walking behind pushing me.So son rest in peace and remember mommy loves you and misses you .I'll see you whwn I get there.

this shrine is small because I his mother took it down.

Ms. Darnice.... I posted a couple of posts above as anonymous..i often come back just to visit this page whenever Marcus is heavy on my mind..i never got a chance to meet you, but I wanna say im sorry for your loss... U and ur family are in my prayers..he talked about u all time often saying you were his best friend :).. My mom lost my brother n 2006 the same way we lost Marcus, so I kno the pain u must feel often..he was there for me and im grateful God put ur son n my life..... He was a true friend, a jewel to me..eventho I dont kno u, I love u for creating such a beautiful person..inside and out..keep ur head up and tho u will never get over the loss of a child, i'll ask God to make it easier for u to deal day by day...... R.I.Heaven babe... Gone but never forgotten!

I just stumbled across this blog and I believe God made it possible for a reason.

I was with Demarcus that night... I found him in the alley during his final moments. I was there when he passed and although I had never met him before I think of him often and the senseless loss of his life.

For his mother and friends I don't know if it will give you any comfort but know that someone held his hand, spoke to him, encouraged him to "hang on" and tried to give him some comfort and peace in his final moments. He was NOT alone when he passed.

I will carry this with me the rest of my life and I sincerely keep his family and friends in my thoughts and prayers. I hope and pray his murderer was brought to justice.

If you have any questions feel free to post and include an email and I will respond.

@ anonymous Omg ThankGod for u!! Im glad someone was there with him..i cant get over it..smh! Feel free to email me @ niyairea@gmail.com....

This Your cussin jasmine Marcus I love you and I miss cus.

This is Anonymous who was with DeMarcus when he passed. I am just now seeing the response email with the email. I am so sorry about that. Six years later I still think of that night and as I still live on that block I pass the scene of DeMarcus's passing every day. He has not been forgotten. I found myself back on this page that was setup in his memory.

For his mother, friends and loved ones I know nothing will fill the void. Hopefully they have some small measure of justice in that the person responsible for his death is in jail. This is such a sad situation all around.

I don't think I will ever forget that night for as long as I live. I think God put me in that alley for a reason, not just so I could try to save DeMarcus's live and give him some comfort in his final moments but so I could bear witness later for his family and friends. I don't think he was in pain, I think it happened so quickly he was in shock, I spoke to him and gave him encouragement, held his hand before I started CPR. Please know I tried the best I could to save him for you but the Lord had other plans. After the police came on the scene I just remember the screams of his family and friends as they called out his name and my heart just broke. I think of that a lot over the years. That is what fueled me to cooperate with the police, and while I didn't see or know who shot DeMarcus I hope that my recounting of that night helped the case against his murderer.

For the mother I hope this helps you in some way. DeMarcus has touched my life forever.