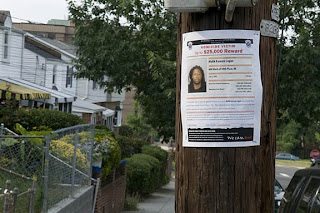 These DC Metropolitan Police reward posters regarding the murder of Malik Kareem Logan are in the 800 block of 50th Place NE, Washington, DC. The neighborhood was plastered with them.
According to online reports, police arrived at this location about 9:15 p.m. Saturday July 4th, 2009, and found Malik Kareem Logan, 23, with multiple gunshot wounds. Logan, of the 4200 block of Sixth Street SE, was taken to a hospital, where he was pronounced dead. The reason for the shooting was unclear.

The wrong kind of fireworks for Independence Day.
Posted by Lloyd at 5:34 PM