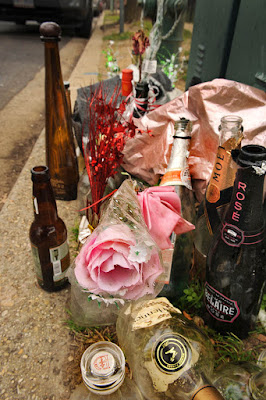 From a DC police report: Detectives from the Metropolitan Police Department’s Homicide Branch are investigating a homicide that occurred on Monday, February 17, 2020, in the 2100 block of I Street NE, Washington DC. At approximately 5:27 pm, members of the Fifth District responded to the listed location for the report of an unconscious male. Upon arrival, officers located an adult male, inside of a residence, suffering from a gunshot wound. DC Fire and Emergency Medical Services found no signs consistent with life. Investigation at the scene revealed that the shooting took place inside of the residence. The decedent has been identified as Cordaro Pierre Chambers, 31, of Northeast DC.

This shrine is in the Carver Terrace section of DC. I spoke to a neighbor of Mr. Chambers about the shrine, and discussed the sad effect that homicide has on an individual's and community's psychological state. We both hoped for peace in the area, for healing, and for positive memories of those lost to violence.
Posted by Lloyd at 2:36 PM