From an Alexandria police report:  Alexandria Police are investigating a suspicious death that occurred in the 2700 block of Holly Street on Wednesday, February 13, 2013. Around 6:50 pm, a resident of the address came home to find a 94 year-old man, who was also a resident, suffering from upper body trauma. The victim was pronounced dead on the scene by medics.
An autopsy performed Thursday has determined the manner of death to be a homicide. This is the first homicide for Alexandria in 2013. There were no homicides in 2012.

The victim of last night’s suspicious death has been identified as Elmer Roehrs, 94. 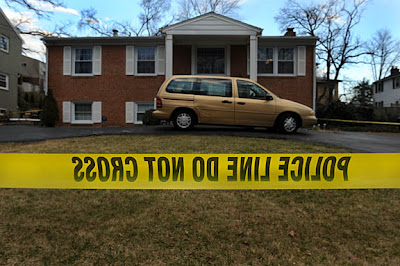 Alexandria detectives had been investigating a burglary that occurred at the same address in the 2700 block of Holly Street on November 27, 2012. The suspect in that burglary was located and arrested last night by the Alexandria Police Department’s Tactical Anti-Crime Unit. Marie Maybell Johnson, 45, of no fixed address, was arrested around 3:15 am following a traffic stop in the 1400 block of Duke Street. She is being held without bond. She was charged with Burglary and Grand Larceny from the incident on November 27, 2012. She has not been charged in relation to the incident from last night. That investigation is ongoing.

This slaying occured on a quiet, beautiful and prosperous neighborhood in the Del Ray section of the city.
Posted by Lloyd at 3:00 PM