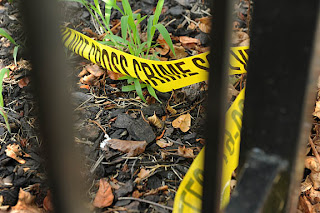 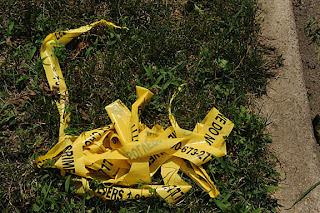 This crime scene tape is at the site where Osman Al-Akbar was slain. As the crime had just occurred the day prior to my site visit, no memorial had yet arisen.

Peace be upon you, Mr. Al-Akbar.

From DC police sources: On Wednesday, August 17, 2011, at approximately 1:39 am, units from the Third District responded to the 2600 block of University Place NW, Washington DC, to investigate the report of sounds of gunshots. Upon their arrival, they observed a male lying in the street suffering from multiple gunshot wounds. DC Fire and EMS determined that the victim, Osman Al-Akbar, 19, had no signs consistent with life, and was pronounced later dead by a member of the Office of the Chief Medical Examiner.
Shortly after the shooting, Third District officers stopped two suspects in connection with the homicide. After further investigation by detectives from the Homicide Branch, Rashid Caviness-Bey, 19, of Northwest and a 15-year old male of Capitol Heights, MD, were charged with First Degree Felony Murder while Armed and Carrying a Pistol Without a license (CPWL).