From a DC Police report: Detectives from the Metropolitan Police Department’s Homicide Branch are investigating a homicide that occurred on Sunday, May 26, 2019, in the 3500 block of Wheeler Road SE, Washington DC. At approximately 10:35 am, members of the Seventh District responded to the listed location for the report of a shooting. Upon arrival, members located an unconscious juvenile male victim, suffering from a gunshot wound. DC Fire and Emergency Medical Services responded to the scene and transported the victim to a local hospital. After all lifesaving efforts failed, the victim was pronounced dead. A short time later, two adult females and a juvenile female walked into a local hospital suffering from gunshot wounds. They are all being treated for non-life threatening injuries. The decedent has been identified as Maurice Scott, 15, of Southeast DC.

There has been quite a bit of attention to the loss of Mr. Scott. The Washington Post and the City Paper have reports. He appears to have been a well-liked, positive young man with a bright future. A relative told me he leaves. behind a twin sister. May her and her family's hearts have strength and healing. His loss has affected the community deeply.

While at this mural painted to him. on the side of the Holiday Market where his life ended in a spray of gunfire, there were several young neighbors, friends, and relatives who came by to pay respects. Earlier in the day the police chief and Mayor Bowser also visited this site and made remarks regarding ongoing violence in the community, and their efforts to stem the tide. I was told that the artist created this exceptional portrait within one day.

In all my 16+ years documenting street memorials in our area, this is the first such portrait mural I have encountered. It is a testament to the meaning of this young man's life and his community's grief at the loss. 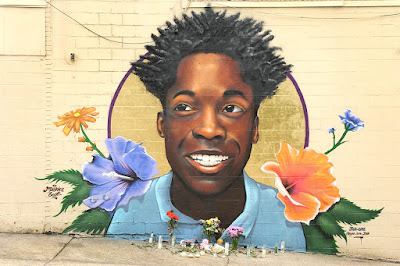 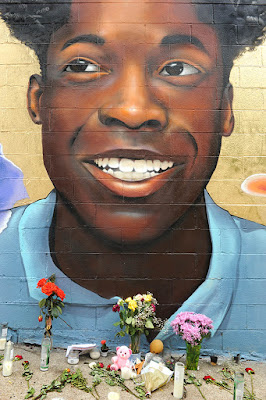 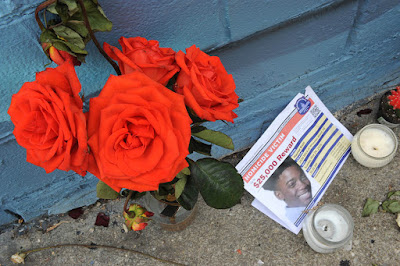 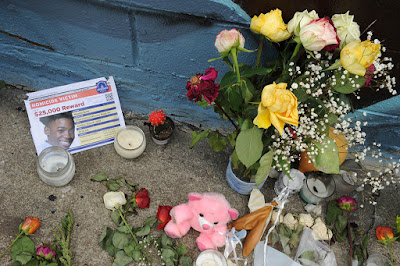 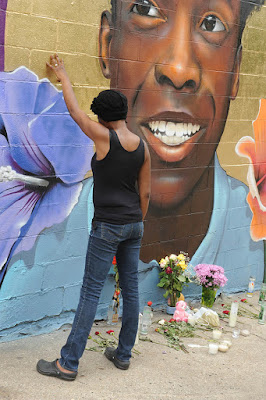