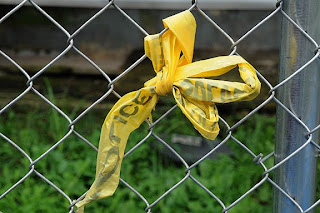 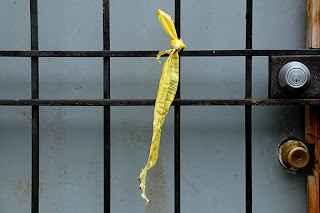 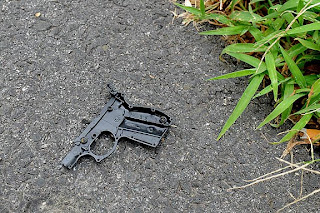 From DC Police reports: On July 19, 2010, at approximately 11:50 pm, Fifth District units were alerted by a subject who advised them that a woman had been assaulted in 1600 block of E Street NE, Washington DC. Officers responded to the location and found Theresa Hungerford, 45, of the 1600 block of E Street NE, inside or nearby, suffering from apparent stab wounds. DC EMS personnel responded, and determined that Ms. Hungerford was dead.
Friday, July 23, 2010, at approximately 10:45 am, members of the Homicide Branch arrested Nathaniel Phillips, 36, from Northeast DC, for the stabbing of Theresa Hungerford and charged him with Murder II while Armed.

I found this police crime tape in the alley behind the street- one section of which appears to have been tied into a bow.

I observed the broken toy gun at this site.
Posted by Lloyd at 10:19 AM