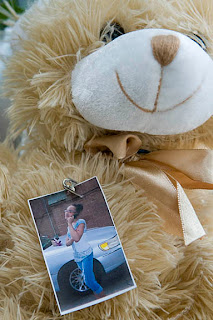 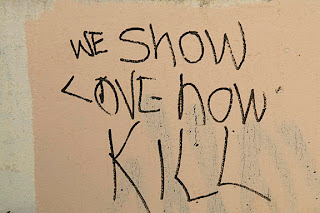 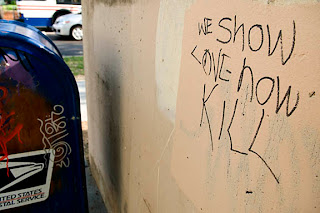 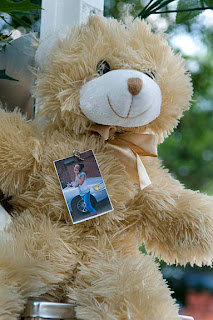 I was searching for a possible shrine to a murder victim, Jonathan Sanchez Estep, which occurred recently in this block. A friend of the deceased who was passing by, also saw this small shrine, but the bear and photo on a bus stop pole, were clearly not for Mr. Estep.

On-line searches gave me no more information about whom this small tender shrine honors.

I found the nearby graffiti tag haunting, troubling, and a mystery.

The friend, Antoine, told me "I hope someday you won't be reading about me this way."
The fact that a bright young African-American man has to have this possibility in his consciousness speaks volumes- and should prod us all to do our part to increase peace.

From DC Police reports:
On Saturday, July 10, 2010, at approximately 8:31 PM, police officers were dispatched to 11th Street and Columbia Road, Washington DC, for the report of a shooting. They located the victim in the 3000 block of 11th Street, NW, suffering from gunshot wounds. Jonathan Sanchez Estep, 24, of Northeast DC, later succumbed to his injuries and was pronounced dead at an area hospital.
A second victim was also shot during the incident. He was transported to an area hospital and released.

To all, and this unknown young woman, and your families - peace and strength to you and yours.
Posted by Lloyd at 9:49 AM