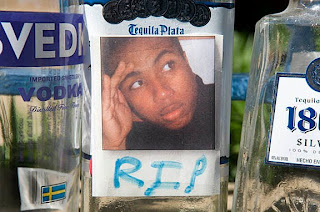 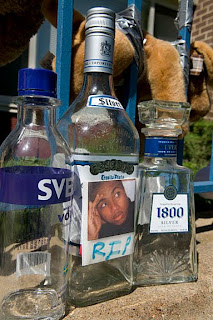 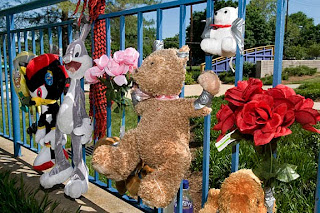 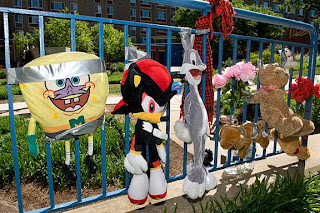 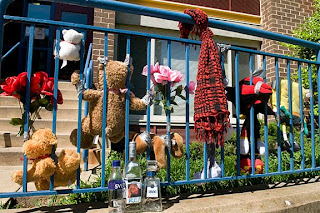 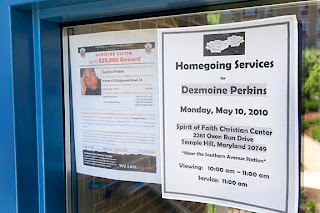 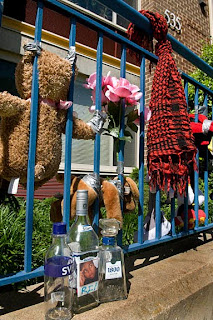 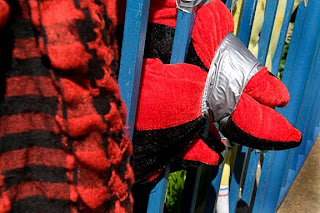 This shrine to Dezmine (or Dezmoine) Perkins, 16 years of age, is outside 535 Edgewood Street NE, Washington DC.

About 11:00 PM on May 1st, 2010, young Mr. Perkins was found suffering from multiple gunshot wounds, and was pronounced dead at a nearby hospital. According to the Washington Post, his neighbors said that he was a respectful young man who liked playing basketball and football. His aunt shared that he was a good kid, and that this should not have happened.

Peace to his soul and to the hearts of his friends and family.

And may justice reign.

He was killed in the same block as Kenyetta Nicholson-Stanley, also a teenager, who was slain during October 2009. Her shrine is still standing, and kept in good shape.

See also:
http://dcshrines.blogspot.com/2009/10/sad-eyes-for-kenyetta-nicholson-stanley.html
Visited with Danny Harris of www.peoplesdistrict.com
Posted by Lloyd at 11:27 AM

I came across this site after googling the name Dezmin Perkins. A Facebook friend had commented on an article from 1993 from the Washington Post. Sadly the article was about this young man's father, Christopher WIggins, known to his Coolidge High and street friends as "Chew". Chew was gunned down at the age of 20 when his son was only 4 months old. Sad the cycle continues.

My godson was a good kid. There was no reason his life should have ended this way. It is important that we as leaders, parents, and family of young people do our jobs educating our young people on constructive ways to express themselves and provide nurturing environments for them...a child left to themselves will seek out mischief. The life of this precious soul may have been saved if someone had taken some time to share hope. Please don't let my baby's death be in vain.

Dezmoine i miss you so much,, Tre'lonte told me you had passe and i didnt believe it i was crying for days i cant believe your gone u aint do nothing wrong to no one i miss you so much if i was in dc and able to have come to your funeral i wouldve came it wouldve been hard though.. its hard loosin the ones you love the most thinkin back to our nicknames henessy and bacardi

Dez itts messed upp dat u gone u inna bedda place now i rembah wen dey told me u gott shott i aint belive it until i saw it on da news my heart juss dropped dass crazzie buh u with god now u home imma c u soon mane i miss u aint seen u inna while last time i saw u u was in da store widd Bryan n ur muva mane i miss u R.I.P DEZ LOVE U SONN....!!!!!!!

Its Almost Been Three Years Dez, And Not A Sinfle Dayy Go By That I Dont Miss, Or How Diffetent Lifee Would Be If You Were Still Here. I Miss You Fam ! <\3 .. May Your Soyl Remain To Rest In Peace.

I miss you so much boots , I love you more than you know
-daija