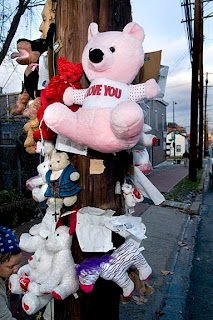 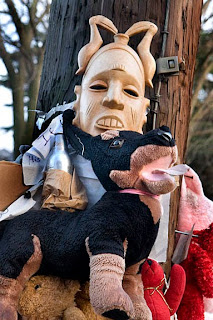 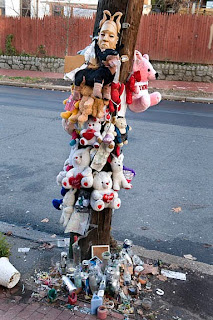 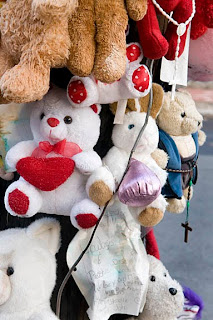 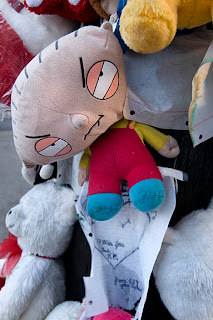 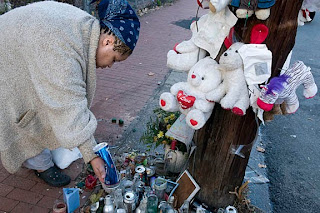 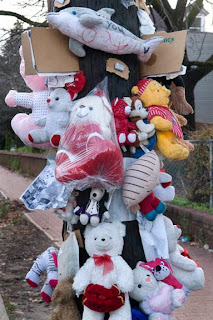 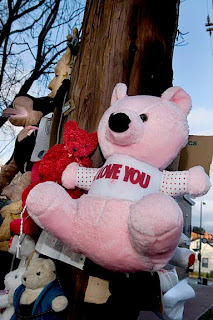 This shrine to Frederick Darnell Ard is in the 2000 block of 16th Street SE, Washington DC.
At 1:11 AM Saturday, November 14, 2009, CDC police officers responded to the 2000 block of 16th St SE, to investigate the report of a shooting. Upon arrival they discovered an adult male suffering from apparent multiple gunshot wounds. The victim, Frederick Darnell Ard, 42, of Suitland, Maryland, was transported to an area hospital where he was pronounced dead at 1:35 am.

Acording to a woman I met maintaining the shrine after the recent rains, Mr. Ard had grown up in the white house across the street, was well-regarded and liked, and understood the heritage of his people. His vigil had many children and families respecting his memory and contributing to the shrine.

It is the first shrine I have encountered that incorporates an African mask.
Posted by Lloyd at 3:22 PM

It's been three months and we are still struggling to get it together, though I know he has our back, I'm still afraid. I miss him so and the lives of my son and I will never be the same, if ever an injustice, this is it. With all my heart and soul, I miss my partner. Love always and Forever, Lady KO and The Jukester.Thank you to this sight, he deserves to be remembered, God Bless your full staff.