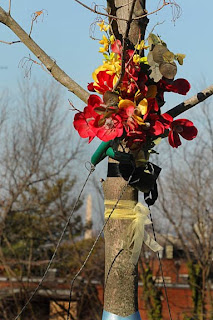 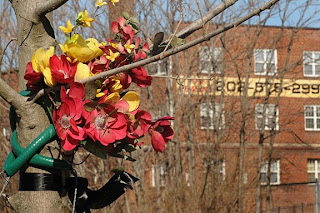 While on assignment to photograph a panorama of Washington DC from its eastern side, I found this small shrine, in the mid 300 block of 37th St SE, on the grounds of John Phillip Sousa Junior High School.

You can see the Washington Monument in the far distance. As DC is generally a low-lying city, this is the first time I have been encountered a shrine with the grand monuments on the federal Mall visible.

I am not certain who this shrine is for. It was exceptionally cold out, not long after dawn, so I saw no residents to inquire about it.

It could be to James Randolph, 49 who was killed in this block on Jan 27, 2008. No leads in the killing have been reported.

Beautiful view. Very troubled neighborhood.
Posted by Lloyd at 11:12 AM