This police tape marks the site of a murder-suicide that occurred in the Seven Corners area of Fairfax County, Virginia.

From a Fairfax County Police report: Mason District – Our Major Crimes and Crime Scene detectives continue to investigate after a man and woman were found dead outside of the entrance to an apartment building earlier today. Officers responded to the 3100 block of South Manchester Street in the Falls Church area of Fairfax County at 11:37 this morning after a delivery driver reported a shooting. Officers arrived to find Christopher Brooks, 30, and Katherine Martell, 30, dead.  Preliminarily, it appears Brooks hit Martel with a Nissan SUV. He then shot her prior to shooting himself. We do not believe there is an ongoing threat to public safety. Brooks and Martell had a child together. The child was not at the scene and is safe with a family member. Martell lived in the building near where the shooting occurred.

From the Washington Post: The episode was called in by a UPS driver who was making deliveries to the nine-story building, Lt. John Lieb said. No one else was hurt in the incident.
The attack was over in seconds. Brooks, driving a white Nissan Rogue, struck Martell near the front entrance of the building at 3101 South Manchester St. Lieb said Brooks got out of the Rogue, shot Martell at least once and then shot himself.
It was not immediately known how many shots were fired or whether Martell was killed by the SUV or in the shooting.
Both people were pronounced dead at the scene.

This site is about 1/4 mile from my home in Arlington, VA. 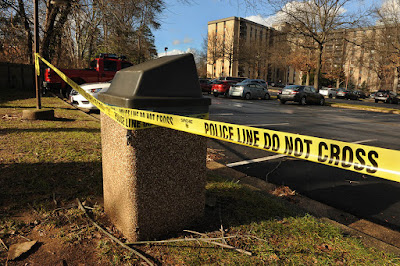