This memorial of flowers is outside a home in a quiet Reston, Virginia neighborhood. The double homicide was allegedly perpetrated by a neo-Nazi teenager.

From a Fairfax County Police report: Fair Oaks Police District – Overnight, homicide detectives obtained petitions charging a 17-year-old Lorton boy with the murders of Scott Fricker and his wife, Buckley Kuhn-Fricker. The suspect was the third person shot at the scene of yesterday’s double murder in the 2600 block of Black Fir Court in Reston, Virginia, [on December 22, 2017]. His injuries were self-inflicted and he remains in the hospital in life-threatening
condition. He is under police guard.
The preliminary investigation determined the suspect, who knows the residents of the home, got inside and was then confronted by the couple. The suspect shot them both and then himself.
Four other family members who were home at the time of the shooting were not hurt. Our Victim Services Section has been assisting them as needed.
The petitions will be served on the suspect at a time yet to be determined, depending on his medical condition. His identity is not being revealed due to his age. 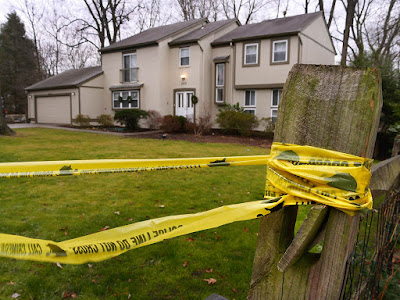 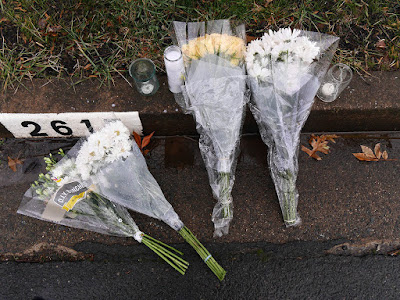 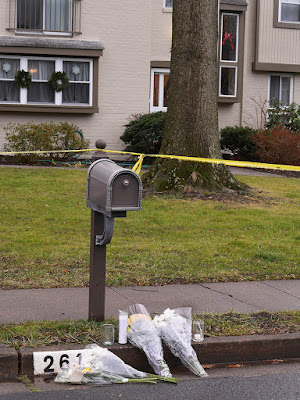 Excerpted from a Washington Post article: Buckley Kuhn-Fricker was so disturbed by what she discovered about her teenage daughter’s boyfriend that she spent a tumultuous week pushing for a breakup. By Thursday, she texted a friend saying the “outspoken Neo Nazi” was out of their lives.

But just hours later, the family said that the 17-year-old boyfriend had shot and killed Kuhn-Fricker, 43, and her husband, Scott, 48 in their Reston, Va., home. It happened while the couple’s children and relatives were inside... gathered to celebrate the Christmas holiday.

The teen, who then turned the gun on himself and is in critical condition at a hospital, was charged with two counts of murder Saturday after police spent Friday investigating at the large, green, single-family home decorated with Christmas wreaths and snowflakes.

Fairfax County police would not offer a motive for the double slaying, but family members and friends tied it directly to the couple’s struggle to keep hate out of their home...

Friends and family said Kuhn-Fricker, who owned an elder-care business, was tolerant and passionate about civil rights and social justice, so she put her foot down after discovering alarming tweets and Twitter messages she believed were connected to her 16-year-old daughter’s boyfriend after looking at the girl’s phone.

On Sunday night, Kuhn-Fricker alerted the principal of the Fairfax County private school that her daughter and the boyfriend attend, attaching numerous images of the account that had retweeted missives praising Hitler, supporting Nazi book burnings, calling for “white revolution,” making derogatory comments about Jews and featuring an illustration of a man hanging from a noose beneath a slur for gay people. In a series of private Twitter messages, the account Kuhn-Fricker attributed to the boyfriend responded to a photo of a candy shop that featured a display of a dreidel by writing, “ima run in there with my swastika armband right now.”

Janet Kuhn, Kuhn-Fricker’s mother, said that her daughter told her she believed the boyfriend was trying to indoctrinate the girl with white-supremacist ideas... Kuhn-Fricker said her daughter grew so upset in recent weeks when she told her to stop seeing the boyfriend the teenager refused to eat. “We can’t allow her to see someone associated with Nazis,” a friend... recalled Kuhn-Fricker saying. “We don’t associate with hate groups in our house.”

Janet Kuhn said the family staged an intervention with her granddaughter on Wednesday, to convince her to stay away from the boyfriend. There was anger, crying and a long discussion about the Nazis, but the teenager eventually agreed it was in her best interests to end the relationship.

Janet Kuhn said that a detective revealed that her daughter and son-in-law went to check on her granddaughter in the early hours of Friday morning, after possibly hearing a sound.
The parents discovered the boyfriend in their daughter’s bedroom... Scott Fricker yelled at the boyfriend to get out of the house and to never return... At that point, the boyfriend pulled out a gun and shot both parents. The boyfriend then shot himself in the head.

Peace. Peace, justice, and every healing. Shalom. Peace.
Posted by Lloyd at 4:51 PM

Thanks for sharing the photos. Rest in peace, Buckley and Scott.

My condolences for those affected by this tragedy. May this promise from the Bible bring you comfort and hope for the future.

Revelation 21:3, 4
"With that I heard a loud voice from the throne say: “Look! The tent of God is with mankind, and he will reside with them, and they will be his people. And God himself will be with them. And he will wipe out every tear from their eyes, and death will be no more, neither will mourning nor outcry nor pain be anymore. The former things have passed away.”

God bless these families. My prayers are with you🙏