From a DC police report: On Friday, August 23, 2013 at approximately 11:12 pm, patrol officers from the Fifth District responded to the 700 block of Langston Terrace NE, Washington DC, for the report of a shooting. Upon their arrival, they located an adult male suffering from an apparent gunshot wound. DC Fire and EMS transported the victim, identified as Tracy Lamont Day, 38, to a local hospital, where he succumbed to his injuries and was pronounced dead.

I spoke with two women, both mothers of school-aged children, at the site of this crime-scene tape. They said that though there are obvious challenges, this historic complex has generally been a fairly safe environment for their families. 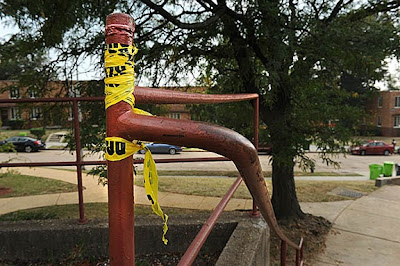 More information on this case is on Homicidewatch.
Posted by Lloyd at 11:32 AM