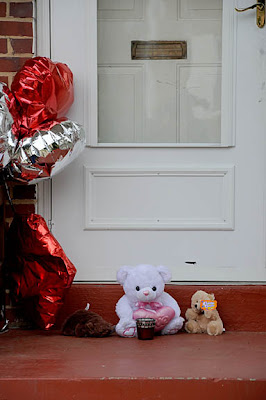 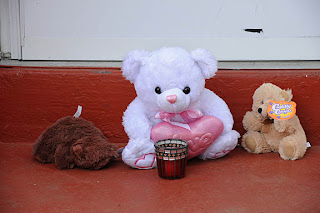 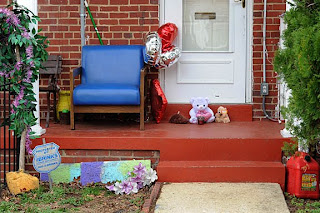 From the DC police report and news sources: Vanessa McGee, 36, was fatally shot shortly before 3:25 am on Saturday, March 5, 2011, inside a home on the 4700 block of B Street SE, Washington, DC. Police went to the residence for a report of a shooting, and found McGee suffering from a gunshot wound. She was taken to a hospital, where she died.
Ronald G. Pickett, 26, of DC, has been charged in connection with the slaying. He was arrested at about 11:30 am March 5, 2011, and has been charged with Murder 2 while armed.

Poignant... and much strength to her loved ones.

More information is at HomicideWatch DC.
Posted by Lloyd at 11:47 AM

It is so SAD to hear about another black on black crime or accident. Us as African Americans should be ashamed! I know I am and the best result that can come from "a" death is a couple of teddy bears? We're destroying each other without the help of outside interferance. My Heart hurts.

WOW!!!!!! Just looking at the porch were we use to sit and run our mouths. 1Month and 3 days already, how I wish we could go back sooo glad I seen you days before and I talked to you, but that just wasn't enough for me. Missing you like crazy, there are no words that could explain. LOVE U

Justice will be served and no matter how Ronald and his family says it was an accident it will not bring my cousin back. He will be in jail and his family can write to him visit him talk to him but "us" her family and friends will never see our Super Star ever again! My heart is still hurting because I can never see my cousin's smiling face and hear her loud voice. No reason in the world that you could ever tell me that I can understand why this had to happen. Putting your hands on her wasn't enough pulling the trigger of your gun had to prove how much of a coward you really are. Walking away was to your advantage but no!!! You had to let your jealousy take over you weak minded ass! God will punish you for what you've done trust and believe me when I say you will suffer because your concious will eat you alive every second every hour of the day that your sick ass breaths!!! Love you and miss you cousin! Love Sabrina