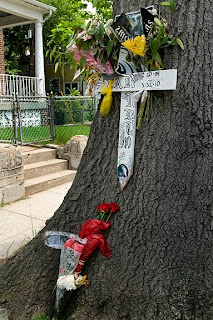 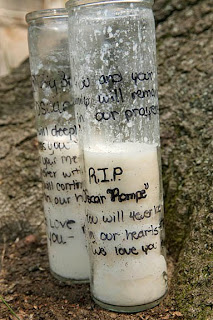 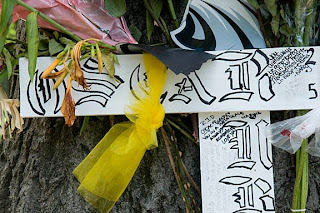 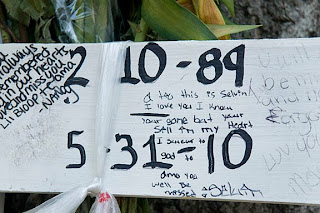 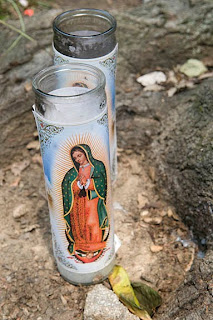 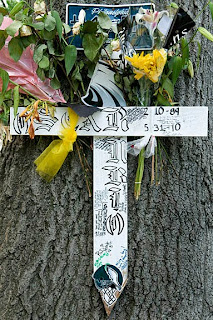 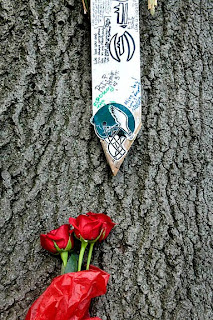 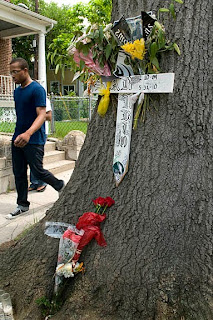 This shrine to Oscar Rubio is in the 800 block of Crittenden Street, NW, Washington DC.

From the DC police report: On Monday, May 31, 2010, at approximately 2:33 am, units from the Fourth District received a radio run to respond to the 900 block of Decatur Street, NW, for a subject shot. Upon their arrival, they discovered a male victim suffering from a gunshot wound. He was transported to an area hospital and admitted. At approximately 2:40 am, a second radio run was dispatched for a second victim located in the 800 block of Crittenden Street, NW.
The male victim was transported to an area hospital where he succumbed to his injuries and was pronounced dead at 3:44 am. The decedent is identified as Oscar Rubio, 21, of the 800 block of Decatur Street NW. The identity of the surviving victim is being withheld as he is a witness in this case. Detectives are investigating an Armed Robbery as the motive.

Candles and flowers for Oscar. May all concerned have peace, strength, and comfort.
Posted by Lloyd at 10:43 AM

We will all miss u........ u will always be alive in our hearts a true friend like a brother that has been there for us when we needed u in a better place now RIP OSCAR RENE LAZO RUBIO (FOREVER IN OUR MEMORIES AND HEART)

another year gone by brother 3yrs with out you. until we meet again save me a cold heni to kick once I get there. rest on brother

Hey my love its been 3 long lonely yrs and I'm still tryna cope wit it...visiting and chatting wit u the other day felt so great, I really miss u and its tearing me up like bad I love u....Until we meet again rest on sweetie*

Happy birthday family, we miss you very much until we meet again Oscar!

I'm back I miss u soooo much that it hurts I just wish u were here, I would love to see your smile right about now...so much has changed and I'm just like if u were here it would all be alright life with u would have been amazing I love u, until we meet again sweetie I'll love u always*

Heyy heyy sweetie 8yrs is approaching 8long lonely urs with out u, I been goin thru it these last couple weeks I miss u, I need u, I wanna touch u, I need u to make me laugh, I need u to be here I need it all all of u...why u leave me like this I swear life with u would have been amazing I know so anyway I love u and always will until we meet again my love*

Hey babe one of those nights I need u, so much would have been done with so much left to be do come back sweetie plz if only for a second I’ll be fine with just that. Love u*

Hello my love Happy Valentine’s Day I miss u ain’t like that’s gon change tho, anyway continue to rest peacefully babe love u, until we meet again*

Hey sweetie 9 yrs ago on this day they took u away from me and it ain’t been the same but I been out here tryna make it...but this ain’t how it’s suppose to be we suppose to be living it up together babe instead I’m out here without u I NEED U HERE swear I can turn the pages back and just at least have one more day just one more I love u rest well my love until we meet again*

Hey hey my love Merry Christmas I swear I wish u were here with me we’re suppose to be living this life together it ain’t suppose to be like this. We should be living life right now probably woulda had our own lil family started by now I miss u and I still have yet to get over the fact that u are gone I don’t think I’ll ever get over it honestly I love u (I wish u could here me say it) I miss u and I need u here with me, but I just gotta understand u are in a much better place then here....I love u babe Merry Christmas

Hey sweetie just celebrated another birthday without u, it would have been lovely to have u here celebrating but I know u had a ball up there in heaven and u partied much better there. I miss u soooooo much and if I could just turn back the hands of time and just pour my heart out to u babe I would I wish God could grant me the opportunity to just see u face to face one last time just a minute at least that would be more than enough for me. I love u, I miss u, I need u and babe I won’t and have not forgotten u...until next time my love*

Hey sweetie I miss you 😘 ain’t like that’s ever going to change but still, I swear this ain’t how it’s suppose to be we’re suppose to be living and reminiscing. I love you I just wish I could talk to you, see your face but yea until we meet again my love*

Hey sweetie Happy Birthday I’m still missing you swear I need you here... wish you were here so we could celebrate together but I know you having up in Heaven 🙏🏽 I love you until we meet again my love *

Wow, I never knew the last time we worked together at Giant would be the last time I ever saw you. I don’t know how I came across your obituary all these years later and out of shock right now just felt I had to send my condolences, because I’m sad to see you are no longer here. Remember “Triple H and Stephanie” in elementary school? Lol.... So many memories! May you continue to rest forever in peace🙏🏽🕊