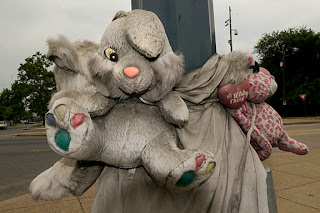 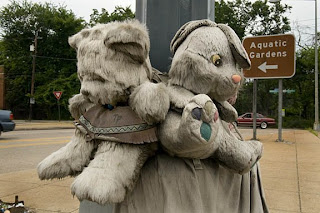 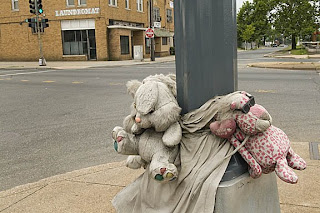 This older shrine to Aric Avon Johnson is in the busy intersection of Kenilworth & Eastern Avenes NE, Washington DC.

FROM DC POLICE: January 23, 2007
Homicide at Kenilworth and Eastern Avenues, NE
At approximately 10:45 pm, on Monday, January 22, 2007, Metropolitan Police were called to the intersection of Kenilworth and Eastern Avenues, NE, for the report of a shooting.  Upon arrival ,officers located 26-year-old Aric Avon Johnson, of the 2000 block of D Street, NE, suffering from an apparent gunshot wound to the body.  He was taken to the Prince George’s Hospital Center and pronounced dead.

The only thing left are his family's memories, and these fading, weathered toys.
Posted by Lloyd at 3:20 PM